On the September 17, 2018, the remnants of Hurricane Florence had moved inland from the North Carolina coast and up into the Shenandoah Valley.  As he did during all major storm events, Michael was in his Soil and Water District truck patrolling the water levels at several flood control dams.  At the Tom’s Branch dam, Michael realized that things were a bit different with this storm.  The water level had already topped the 40 foot gauge and water was flowing through the emergency spillway.  Plus, the access road below was underwater, so Michael couldn’t drive out.  He spent the night there, in constant contact with County emergency services crews and his District co-workers in case mandatory evacuations had to be enacted.

Everything that Michael did that night was pre-scripted in an emergency action plan.  It was another day (and night) at work for Michael, the Dam Management Technician for Headwaters Soil & Water Conservation District.  Michael knew exactly what he was doing, but aside from a handful of downstream property owners, the general public had no idea someone was watching over dams or that the dams even existed. 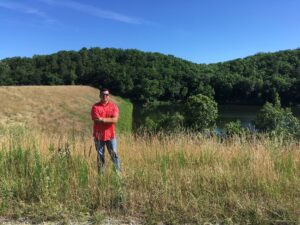 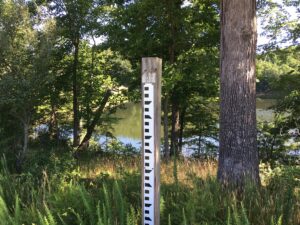 During Hurricane Florence in September, 2018, the water level at Tom’s Branch rose at least 5 feet beyond this 40 foot staff gauge. The normal lake level can be seen in the background. Photo: D. Hirschman.

Where did these dams come from?

In a previous post, I examined how so many rivers in the U.S. had come to have dams on them.  The focus was on the massive structures that were built largely in the West under the auspices of the agencies like the Bureau of Reclamation and Army Corps of Engineers.  However, the great majority of dams are small or medium-sized and were constructed under various Federal and State programs and partnerships.  Collectively, these dams exert a profound influence on our landscape, the hydrology of our watersheds, recreational options, and public safety .  They were constructed in a previous era when whole careers in natural resources management were built upon designing and constructing dams, much as careers today focus on topics such as riparian buffers and green infrastructure.

These days, we generally don’t dam up our rivers.  The ethics, regulatory structure, and funding of doing so has undergone an about-face.  However, the dams themselves remain, and the related careers are those like Michael’s who are charged with monitoring and maintaining these structures for the benefit of the public.

Flood control became an official concern of the Federal Government with programs established by the Flood Control Acts of 1936 and 1944.  However, the Federal impetus for more widespread dam building in small watersheds came about through the Watershed Protection and Flood Prevention act of 1954, otherwise known as Public Law 83-566 (P.L. 566).  Many of the activities under this Act were administered by the Soil Conservation Service (SCS), precursor to today’s Natural Resources Conservation Service (NRCS).

The intent of P.L. 566 was to build structures in watersheds less than 250,000 acres (just shy of 400 square miles).  The structures often had multiple objectives, including protection of downstream agricultural lands, flood control, recreation, water supply, fish and wildlife habitat, conservation, and hydropower (Woodward, 2015).   The intent of the program was that the dams would be federally assisted, but locally led, including ultimate ownership of the dams, piping, and gauges.  Much of this responsibility fell to the Soil & Water Conservation Districts in various states.  That is why Michael and others with similar responsibilities across the Country are based at local District offices.

Through various SCS/NRCS administered programs, 11,845 dams were constructed, influencing 47,373 miles of downstream water and over 48 million residents in downstream communities.  Over 1.8 million acre-feet of water are stored behind these structures (USDA/NRCS, 2017; Woodward, 2015). 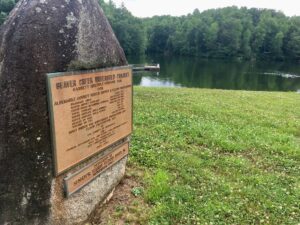 The Beaver Creek Reservoir, dedicated in 1964, is another example of a multi-purpose P.L. 566 dam. The reservoir provides water supply to the community of Crozet as well as recreation.

At the outset, the life cycle of these structures was set at 50 years, and many have exceeded this service life, and must be rehabilitated and modernized.  In addition, State dam safety regulations have become more stringent, requiring more robust (and expensive) spillway designs.  In many cases, when the dams were built in the 1950s through the 1970s, much of the downstream watershed consisted of agricultural lands.  Now, these downstream areas have more residents, subdivisions, and development, and all of that raises the hazard ranking of the structures (the risk associated with a dam breach), exerting yet another pressure point to modernize and rehab the dams and their spillways.  At the same time, Federal funding for this upkeep has reduced significantly since 2010 (Woodward, 2015).

The States and local Districts are the ones with continued responsibility to maintain these structures.

In Augusta County, Virginia, Michael oversees 11 dams, most of which are on private property within easements granted to the District for access and to perform operation and management (O&M) tasks.  Michael provides O&M  assistance for 5 other structures that are owned by the County or its municipalities, for a total of 16 structures.  He also helps plan and oversee the rehabilitation process, which can cost upwards of $1M for each structure.   This is a full-time responsibility and major financial commitment.  The District has developed a constructive relationship with the State Dam Safety Program, County and some of the municipalities to keep the program funded and staffed. 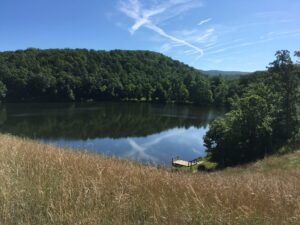 The Tom’s Branch dam is one that the Headwaters Soil & Water Conservation District, with assistance from the Virginia Dam Safety Program (Department of Conservation & Recreation) had reached the end of its design life and was rehabilitated. This involved expanding the emergency spillway, replacing structures in the lake that control water level, and installing equipment that monitors water levels remotely. Photo: D. Hirschman. 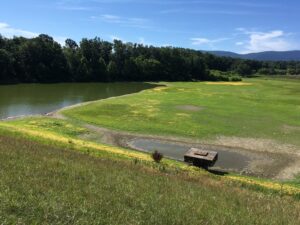 This older dam in Augusta County is next on the list for rehabilitation. The District, with assistance from the Virginia Dam Safety Program, has been on a multi-year mission to rehabilitate and modernize all of its P.L. 566 dams. Photo: D. Hirschman.

One of these municipalities is the City of Waynesboro, which sits astride the South River downstream from 12 of the District’s flood control dams.

If you have lived in Waynesboro for any length of time and it is raining hard, you pay attention.  Throughout its history, Waynesboro has been plagued by a number of catastrophic floods.  So, do the upstream dams provide any help for this situation?

A 2006 Masters Thesis by then Virginia Tech graduate student, Michael Bliss, did extensive modelling concerning the influence of those 12 dams on downstream flooding.  Bliss found that the 12 structures work in concert to reduce flows into the South River by 58 to 87% for large but more common storms (expected to occur on average every two years) and by as much as 98% for larger storms, such as those expected to occur once in a 100 years (Bliss, 2006).

In term of the actual water level of the river during major storms, which is the important thing if you live, own a business, or have to drive to your job in Waynesboro during one of those storm events, the work of the dams drop the flood level typically by 2 feet, but by over 3 ½ feet during major events, such as Hurricane Camille or the Election Day Flood of 1985.  This influence becomes more profound as you move upstream into Augusta County.

This fact may allow you to sleep better if you live downstream, but others may be losing sleep, including the Soil & Water District personnel who inherited the responsibility to maintain the dams.

While Headwaters District has worked out a constructive partnership with the surrounding County and jurisdictions, other Districts around Virginia and across the U.S. are not as fortunate.  There is some state funding for projects, but generally not enough to support a full-time position, such as Michael’s.  That means that Districts have to divert staff resources away from other programs, such as water quality cost-share.  During the big storms, District staff may be awake at night, thinking about whether local emergency services crews are aware of the situation and how to fund those much-needed rehab projects.

The bottom line is that when we build infrastructure, someone has to maintain it.  The P.L. 566 dams were constructed in a heyday of infrastructure development in general.  The model of Federal assistance and local leadership and management may have been a good one at the time, but now the responsibility falls to agencies that have to cobble together the resources to dispatch their duties for a set of structures that can be largely out of the public eye.

For a variety of regulatory, cultural, and environmental reasons, we no longer rush headlong into dam building like we did in the 1960s and 1970s.  However, the structures are still part of the watershed landscape.  For Michael, who comes from a farming background and is not afraid of hard work, the job is rewarding and important.  He may lose sleep on occasion, such as on that rainy night at Tom’s Branch in 2017, but it is all part of the job.

Bliss, Michael A. 2006. Procedures to Perform Dam Rehabilitation Analysis in Aging Dam.  Thesis for Master of Science in Civil and Environmental Engineering, Virginia Polytechnic and State University, May 18, 2006 (plus associated PowerPoint presentation).