Recently, I had the occasion to put a canoe in the water, which of course involved getting the canoe on and off of the car. When it came to lashing the boat to the car, my companions for the day just stood back and watched. They observed the placement of the canoe on the racks, the positioning of the ropes, and finally the slip knots that sealed the deal. One actually muttered softly, “oh, that’s how you do it,” as if I were performing a magic trick.

I assure you, there was no sleight of hand involved. Far from it – it was the direct product of the best lecture I heard in college, delivered by the renowned lake researcher, Dr. Daniel Livingstone.

Before I divulge Dr. Livingstone’s canoe lashing technique, I have the explain why this was the best lecture from my college years. The simple explanation is that I don’t remember any of the other lectures in any degree of detail. After some forty years, that knowledge is lost in the mists of time, but the canoe tying lecture has been lodged in my memory banks.

The first thing you may ask is why a renowned professor at Duke University would even give a lecture on how to tie a canoe on a car. Here’s the story.

In 1982, I was the only undergraduate in Dr. Livingstone’s Limnology class (study of lakes), otherwise occupied by a small cadre of brilliant graduate students. I was barely hanging on as Dr. Livingstone filled the chalk board with strings of equations to describe various lake dynamics of fluvial mechanics, wind shear, and stratification. From my observations, the brilliant graduate students were absorbing all of it.

At some point during the semester, Dr. Livingstone took us on an overnight camping trip to the blackwater swamps of eastern North Carolina. Preparing for this trip required that the brilliant graduate students tie a small fleet of canoes onto their cars. It got to be a real heated academic debate, as the brilliant graduate students had different opinions on how to execute the operation, and none of them quite got it right. For all their brilliance, the canoes were more tippy on top of those cars than they’d ever be in the water. Dr. Livingstone stood to the side, observing, but not interfering. I seem to recall a wry smile on his face.

We had a great trip exploring the swamps, collecting water samples, and learning about the ecology of the area. The main thing I remember is that the dire pre-trip warnings about water moccasins dropping from low-hanging branches into our canoes failed to actualize (much to my relief).

When we got back to campus, Dr. Livingstone decided not to talk about the scientific findings of our trip, but on the proper way to tie a canoe onto a car. He devoted the entire lecture to this subject, complete with his trademark chalkboard full of equations explaining the various forces of wind and velocity that the canoe must withstand once lashed to the top of a car. I was transfixed.

While I certainly cannot replicate Dr. Livingstone’s equations, I still remember the process that he taught us, reinforced by thirty years of application.

Dr. Livingstone was the epitome of the professor adventurer. In between the equations, he told many great tales of adventure studying remote lakes in Africa and Alaska. One oft-quoted story is when his small rubber research raft, with him and his research assistant aboard, was swallowed by a crocodile on an African lake. I also recall his stories of having to bivouac on a frozen lake in Alaska after the plane that was supposed to retrieve him failed to materialize at the appointed time. He invented the Livingstone piston sampler, a lightweight tool for core sampling on remote lakes. His research constituted a mighty contribution to both anthropology and early understanding of climate change.

I was impressed by the fact in his obituary that he declined to be included as a co-author when the brilliant graduate students published the results of their research, noting that the work was theirs to take credit for.

Dr. Daniel Livingstone taught and did research at Duke University from 1956 to a year before his death in 2016. Prior to his death, he donated his family land in Nova Scotia, over 600 acres, to the Nova Scotia Nature Trust.

So, the canoe tying lecture was an insignificant part of his legacy, but people like Dr. Daniel Livingstone are remembered for their acts, both great and small. 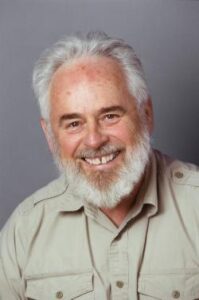 As for actually navigating the canoe once it is in the water, I must have slept through that lecture!

Learn more about Dr. Livingstone’s career and research here.  See below for a graphic portrayal of the canoe tying lesson.

The forces that must be considered when tying a canoe onto a car: (1) the car moving forward with velocity with exert a force that wants to push the canoe backwards; (2) the canoe, while the car is slowing down or stopping suddenly, will want to keep moving forward at the velocity at which it had previously been travelling; (3) there will also be lateral forces pushing against the broad side of the canoe due to wind or while turning.  Photos: D. Hirschman.

Left: Dr. Livingstone would not approve of this configuration with both rear and front tie-down ropes, highlighted in the photo, connected from the car to the canoe in the same direction (both tilted towards the back of the car in the photo). This will only address one of the forces acting on the canoe. If the car stops suddenly, the canoe may shift forward. Right: Dr. Livingstone’s preferred method with front and rear ropes having opposing slopes from car to canoe, addressing both the frontwards and backwards forces.  Photos: D. Hirschman.

For lateral forces, the left photo, with ropes tied to the end of the roof racks, leaves more wiggle room for the canoe to slide around compared to the right photo were the ropes are cinched down close to the body of the canoe on both sides. The left configuration is, however, very common!  Photos: D. Hirschman.