The Damming of America’s River: Reflections on the Age of the Technocrat

Most of the nation’s rivers and tributaries had. . .been dammed by the late 1960s. . .The mainstreams of the Columbia, Missouri, Mississippi, Colorado, Tennessee, Ohio, and Rio Grande had been nearly fully developed (NRC, 1999, p. 18).  To our modern sensibilities, this seems like a crazy fact.  What societal forces were in play to allow this to happen?

In recent decades, we have come to value free-flowing rivers. Many of us value ecosystems, wild places, and recreational adventures on moving water, accompanied by an instinctive mistrust of big infrastructure projects that are perceived to undermine these values. However, these are not the same values that underpinned the damming of most of our country’s rivers. Those actions were driven by an alternative set of values, passionately-held, pursued with rigor, and sustained through decades of Congressional actions and an evolving edifice of bureaucracies. It is important to realize that these competing value systems are still in the process of colliding, or perhaps melding with each other.

In the early 1990s, as part of my job responsibilities, I routinely attended meetings of the local water and sewer authority, held in the agency’s library and board room. Floor-to-ceiling bookshelves lined two full walls of the room. The shelves were lined with thick technical manuals and standards, books of water law, and technical reports.

There was one area of the bookshelf that contained multiple volumes of thick, blue-bound reports with publication dates from the 1950s through the early 1970s. The titles used terms like “comprehensive river basin planning,” authored by mysterious entities called river basin commissions. Were these organizations, I wondered, a relic from some golden age of planning? Where had these studies came from, had the recommendations been implemented, why didn’t we refer to them anymore? It was and still is a good question, so after nearly 30 years, I decided to probe it anew.

The story goes back to the founding of our Country, and, as some claim, to the organization of entire empires — old and new. Indeed, water management is one of the foundational enterprises of almost all nation states (Huitema and Meijerink, 2017).

As a nation-building enterprise, water management begins with navigation to promote trade, followed closely by irrigation for a growing food supply. As the nation develops, there are other needs for water supplies for cities, flood control, energy development, fisheries, assimilation of pollution, and even more demands to open and maintain navigable waters. All of these functions are driven by the development of national and regional economies. This is the backbone of water management that we all live on today.

In the U.S., these water management functions evolved through the formation of agencies, acts of Congress, and allocation of massive financial resources, as summarized briefly below: 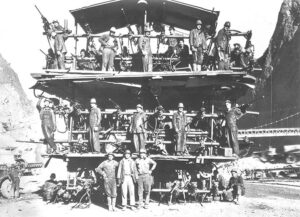 Before the (Hoover) Dam could be built the Colorado River had to be diverted through tunnels. This piece of equipment, named a Jumbo Rig, was designed to speed up the tunnel drilling process. Built on the back of a 10-ton truck, 24 to 30 drills could be operated at once. (Department of Interior Bureau of Reclamation) Source: https://obamawhitehouse.archives.gov/blog/2015/07/07/day-history-construction-began-hoover-dam

Through most of the 1900s, the key themes of water development were conservation and meeting multiple purposes.  However, the term “conservation” had a different meaning than we generally assign to it today:

Conservation at the turn of the century meant using a scarce resource such as water to the fullest extent possible.  It dovetailed with the multipurpose idea, in that the construction of a dam, for example, not only would provide flood control but also would store waters behind the dam for use as drinking water, for recreation, and for irrigation of crops.  (Clarke, Water Encyclopedia).

And, thus, the decades-long enterprise of damming most of America’s rivers proceeded at a dizzying pace.  The U.S. constructed, on average, a dam over 50 feet tall every day during the last half of the 20th century (Richter, personal communication).

Throughout this period, there was tremendous national confidence in and support for the technocrats that planned, designed, and built these massive infrastructure projects.  As Huitema and Meijerink (2017) explain from an international perspective:

In the period from the Second World War until roughly the start of the 1980s, the role of governments in many societies across the world expanded. . .usually because this was an era of confidence in the power of centralized, planned, and rational problem solving.

The technocrats had everything going for them.  And then things changed.  Today there is often a derogatory perspective on the whole technocratic way of doing business.  It is true that the scientists, engineers, hydrologists, administrators, construction companies, and all their allies accomplished grand and at the time unimaginable achievements.  It is also true that the top-down, centralized planning meant that local voices and values were brushed aside.  The result was that a dam project could bury entire communities and ecosystems under the backwaters because that is the price that must be paid for the greater good (as defined by the values of the centralized bureaucracy).

The technocrats did leave one important stone unturned during the dam-building fever, and that is serious contemplation of who would maintain these structures through the decades as they filled with sediment, lost storage compacity, and were subject to decades-long droughts (those interested in the subject of water scarcity and its current manifestations, particularly with Western waters, should definitely consult Brian Richter’s webpage and excellent blog, Sustainable Waters. 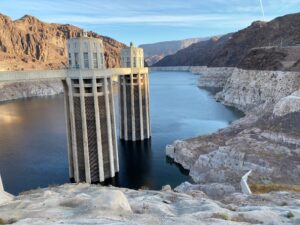 While the confidence in the technocratic model has waned significantly, we have not given up on the notion that waters and watersheds should be considered in a comprehensive fashion with multiple objectives in mind.  These days (and thankfully), these objectives include ecosystems and habitats, water quality (including its role in economic health), climate resilience, and, importantly, equity across diverse communities and populations.

However, it would hard to argue that we have set aside our technocratic tendencies, and these do still serve a purpose.  Consider the Chesapeake Bay TMDL as a modern example.  How many of us truly understand the inner calculus of the Chesapeake Bay Model or the mechanics of pollutant removal?  Yet these tools of the technocracy lend the program much of its structure and credibility.

However, there are key differences between efforts like the Chesapeake Bay Program and the earlier dam-builders.  One of these is that, today, the top-down approach is more complicated and constrained due to more recent legislation and agency protocols (for instance, for stakeholder involvement, interagency coordination, and consideration of alternative actions).  Another difference is that nothing happens without a rigorous bottom-up component for efforts like Chesapeake Bay restoration, with myriad actions by local governments, river basin non-profits, the private sector, and individual homeowners.  Finally, the public’s confidence must be earned, and, if granted, is given only grudgingly and with a limited shelf life.

With regard to large infrastructure projects requiring big investments, such as those managed by the Army Corps, the planning horizon is now decades instead of years, estimated to be 26 years as far back as 1981 (NRC, 1999).

I think what is really happening is that we are in the midst of a multi-generational shift in values, and are navigating how power is granted and used for what we now acknowledge to be a subjective sense of the public good: mine, my neighbor’s, the people on the other side of town or in the countryside, those upstream or downstream from my watershed address, blue, red, or purple, and onward.

Faced with the climate and environmental justice challenges, the task ahead will be to recover some of the expediency and mission-drive from the technocratic era to get the job done while not replicating its oblivious top-down tendencies and litany of intended and unintended consequences.