The $0.25 Part That Breaks the Million Dollar Machine

Recently, two seemingly incongruous things happened on the same day. The first was that I turned on my kitchen faucet and water sprayed all over the kitchen. The second was an online presentation that included an academic review of the deficiencies of stormwater practice inlets. Ah ha, I said, the 25 cent part that breaks the million dollar machine!

I am referring here to the phenomenon whereby a weak link (or cheapest part) of a machine or system causes the whole system to fail. I promise that this blog is about stormwater practices, but first, I will give an example to illustrate the concept.

On August 14, 2003, 50 million people across the U.S. and Canada lost power. One hundred power plants shut down, people were stuck in subways and elevators in New York City, and Cleveland’s water supply was in peril due to reliance on electric pumps. The economic toll was $6 billion. After months of investigation, the culprit was a tree falling on a power line in Ohio and a failed alarm system.

So this may have been the thousand dollar part that broke the $6 billion machine. The exact values are not important – it is the ratio that matters. A relatively small things causes a relatively massive thing to go berserk. After all, why is it that in whatever Star Wars episode you may be watching, the multi-billion dollar Death Star always has some teeny vulnerability that the Jedi Rebels can exploit and blow up the whole mess. That’s what I’m talking about.

When my kitchen faucet went haywire, the culprit was a small, plastic aerator at the tip of the faucet. The man at the plumbing supply company allowed as how you cannot purchase a new aerator (which would cost about $0.25), but must replace the whole faucet assembly. So, $80 later, I had a working machine again. In this case, I was the one that went berserk. 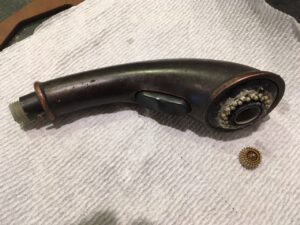 Another thing that brings me to the brink of apoplexy is seeing a beautiful and quite expensive bioretention practice where most of the water that is supposed to be treated never makes it into the practice. The culprit here is poorly-designed and/or poorly-maintained inlets.

The inlet is the place where water from the drainage area is supposed to flow into the practice, and can be in the form of sheetflow, curb cuts (in a parking lot, for instance), or a pipe. Curb cuts are the prime suspects for ineffective inlets that clog up and block or divert some of the flow around the practice and into the downstream drainage system. Compared the cost and design complexity of the soil media, underdrain, and vegetation, inlets are supposed to the be easy part (the proverbial $0.25 part).  However, when the inlet fails, the whole system is compromised. Pollutants and runoff that were supposed to be captured are instead released downstream.

Due to this long-standing pet peeve, I was excited when Dr. Franco Montalto from Drexel University presented an academic study at the recent Runoff Rendezvous (hosted by the Chesapeake Stormwater Network). Dr. Montalto was on a panel addressing the affects of climate change on stormwater management (CSN, 2021) (1). According to Dr. Montalto, with increasing rainfall intensity, urban stormwater systems experience several vulnerabilities. One of the chief culprits? Inlets! Inlet design (e.g., not enough slope from the inlet point to the BMP surface) and clogging due to lack of maintenance cause by-passing of flow and downstream flooding. 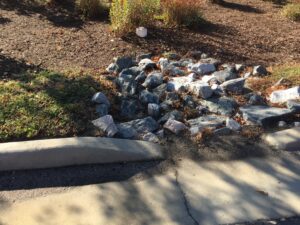 This is a typical inlet design. The rocks are there to prevent erosion, but there is little slope right at the inlet and the rocks stick up above the concrete — forming a lip to catch sediment and debris from the drainage area. This is a high maintenance design that is likely to by-pass water as the sediment continues to accumulate. Photo: Shereen Hughes. 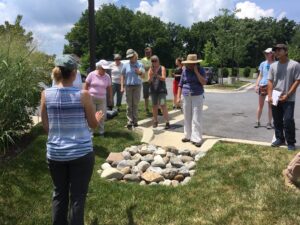 Here’s a good inlet example. The group in the photo was admiring the vegetation, while I was commenting, “that’s a darn good inlet!” There is adequate slope off of the parking lot and the cobble helps prevent erosion and scouring. Photo: D. Hirschman.

If you are not a stormwater geek, here is a health care analogy that you can relate to (with equivalent stormwater references in parentheses). You feel sick and go the doctor (the water is sick from polluted runoff). The doctor diagnoses your illness (too much nitrogen and sediment). The doctor prescribes some medication (a bioretention practice is designed). When you get home, you put the pill in your hand and toss it up towards your mouth. However, your aim is bad; the pill misses your mouth and goes skedaddling across the kitchen floor and under the refrigerator (no treatment for you or the polluted water).

That pill cost a pretty penny at the pharmacy, but the delivery mechanism was flawed – just like a bad inlet.

Professionals that design and oversee the operation of big machines and complex systems think a lot about the equivalents of those $0.25 parts – which ones, if broken or defective will be the cause of a much larger calamity. My son, who is a pilot and studied aviation management in college, described how redundancies are built into an individual aircraft (redundant hydraulic systems) as well as systems such as air traffic control (if one control center goes down, others are designed to cover the airspace).

This is instructive because the redundancies apply to the individual components as well as the system as a whole, which is an apt analogy for urban stormwater systems. Of course, redundancies and back-up systems are a technical and societal necessity when the consequences of failure, as in aviation, are steep and involve life and limb.

As for inlets to stormwater practices, many of the problems go unnoticed, even by trained stormwater professionals (2).  You basically have to be out there during a storm to witness the by-passing and how severe it may be. However, defective inlets do mean that water quality will suffer because the intended volume of runoff is not getting treated and downstream flooding may also ensue.

Based on that, my appeal to the stormwater community is to think about some cost-effective back-ups, redundancies, and design solutions for our inlet problems, including keeping them (mostly) functional during high intensity storm events (I have provided an inlet photo montage below for inspiration). With the huge investments we are making in the Chesapeake Bay Watershed, we should not let inlets be the $0.25 part that compromises the system that is in fact priceless.

(1) The 2021 Online Runoff Rendezvous features multiples presentations and panels.  All of them are archived on CSN’s website.  The panel that featured Dr. Montalto’s addressed climate change, stormwater, and resilient communities.  It is definitely worth watching the full panel as well as the other sessions.  Each one is 90 minutes long.

(2) In the Chesapeake Bay Landscape Professional (CBLP) certification course, we train participants to be perceptive of inlet issues. Through CBLP, we have visited many BMPs throughout the Bay Watershed, and are always amazed at the pervasiveness of deficient inlets. 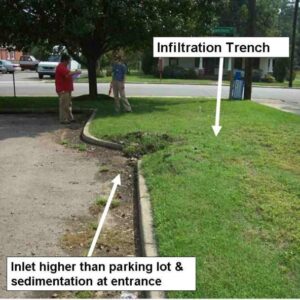 This is an egregious case of the inlet not allowing any flow into the practice due to the grades not being right. This could be a design or construction issue. The parking lot edge in this case is where everything is getting caught, ready to be washed away in the next storm. 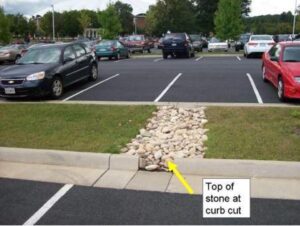 Attractive but largely non-functional inlet due to the height of the rocks. Photo: D. Hirschman. 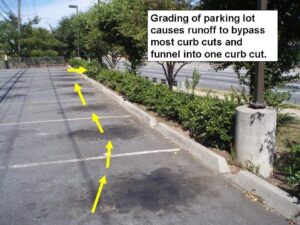 This situation is more subtle. Due to minor grade changes during construction, the flow runs parallel to the curb (yellow arrows), but not through curb cuts into the practice. Just because you build a curb cut doesn’t mean that water will necessarily go through them! Photo: D. Hirschman. 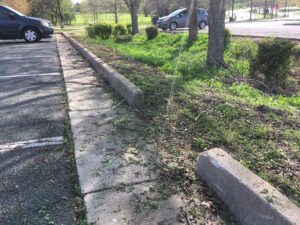 I have been observing this bioretention practice at a local high school since the late 1990s. It was one of the first constructed in our area, and had some inlet by-pass issues from the very beginning. Note how the first foot or so of the inlet is pretty much at grade with the concrete, allowing debris to accumulate. When flow by-passes the inlet, it heads straight down the curbline to a stormdrain. Photo: D. Hirschman. 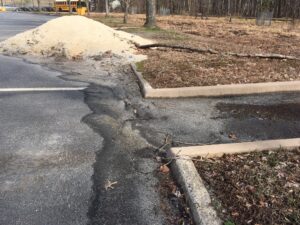 Inlets (break in the curb in this photo) are where every onslaught from the drainage area collects, including stockpiles (as shown here), erosion, leaves, etc. Over time, this can clog the inlet and by-pass some of the flow, which is why inlet maintenance is so important for overall practice function. Photo: D. Hirschman. 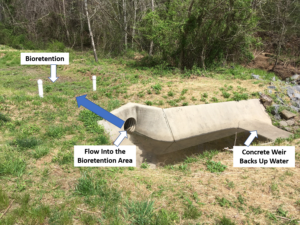 Ending with another good example here I took while on a bike ride.  It had rained the day before, so you can still see the flow pattern.  This is an interesting design, known as a flow-splitter or “off-line” practice. The incoming flow gets backed up by the concrete weir on the right side of the photo. This forces water through the culvert and into the practice. Higher flows will keep going in a straight line, so this practice is only designed to treat the “first flush” of runoff. Photo: D. Hirschman.