I learned to love rivers and appreciate stormwater while living in a wikiup. A wickiup you say? A hut made of brushwood or covered with mats. . .any rude hut. That’s the internet definition. I built my wickiup along the banks of the Little River on land that my cousin owned in northern Durham County, NC. It consisted of a circle of saplings dug into the ground and bent to the middle to form a dome. The whole thing was covered with tarps, and I had a door and a window to look out on the river. My wickiup residency lasted a year and spanned all four seasons. This was 35 years ago, before that part of the County became more crowded with subdivisions as the Durham area expanded.

I would say that I came to appreciate that small river not just for its seasonal variety, but for it various moods. Most of the time, it was gentle and generous, murmuring its song of water, rocks, and gravity. At dusk, the slap, splash of beaver tails added harmony to the song. At other times, the Little River raged and became not-so-little. Those were the most interesting times to go exploring up and down the valley.

I would visit the upstream rock ledges and the downstream road crossing culvert. As the rain poured down, all of the land’s myriad pore spaces that were capable of holding water became saturated and began to flow in small rivulets and then small torrents. It was fascinating to observe all of these mini-rivers in dynamic flux, feeding the river its life blood up and down the valley. Some of the rivulets were muddy where the upstream land was developed. Most of the valley was undeveloped at that time, and the runoff water ran clear and bold as it flowed down small depressions in the forest floor through layers of leaves, rocks, sticks, soil, ferns, and moss. That was my first real lesson in stormwater management.

On clear days, I entertained a fantasy game as I roamed up and down the river, often with my friends Gia and Les, and my little scruffy dog, Gussie McGraw. The game was that time ran in opposite directions, depending on which side of the river we were on. On my side, time went forward, as it is want to do. But if we rock-hopped to the far streambank, time ran backwards. This was not too far off of the truth, as the large property on the far side was locked in a land dispute of some sort, and most of the land was covered in a deep woodland.

On this “backwards” riverbank, there were old stone walls, farm outbuildings in various states of entropy, and small groves of catalpa trees planted in neat rows. These small groves were in the process of being swallowed by the surrounding forest, but the form and structure of the old groves were still evident. That riverbank was mysterious because one had to wonder about the stories that the land was telling. That was the Little River Time Machine.

That was in the early 1980s. Subsequently, the City build a drinking water reservoir on the river downstream, and the backwater stretches close to my former stomping grounds. Aerial photos from today show that, while that part of the County has more subdivisions, that far riverbank is still covered in deep woodlands. Maybe time is still going backwards over there. There is also a regional park and natural area further upstream on the North Fork branch, with miles of hiking and mountain biking trails.

My wickiup, being modeled on a more nomadic type of dwelling, is long gone. I have not been back to check on the beaver family, and I know the rock ledges are still there. The name of the road is still “Trail End Road,” which does provide some comfort. That was a place I loved when I was in my early 20s. In this season of counting our blessings, I am deeply appreciative of the lessons I Iearned from the Little River Time Machine. I have been fortunate to experience many more rivers since that time – some breathlessly wild and fantastic, but most, like the Little River, inhabiting our more lived-in watersheds: sometimes muddy, often clear, taken to mood swings, a humble presence, teaming with life if one looks hard enough, adapting, surviving, inspiring. 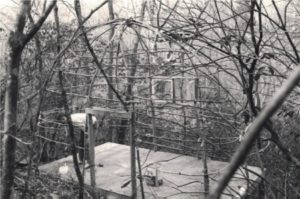 My Wickiup under construction along the Little River 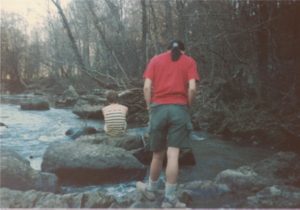 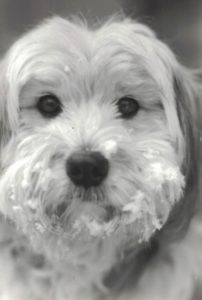