In this traditional folk song, the pawpaw patch was “way down yonder.” It seems the patch is expanding, becoming the dominant shrub along floodplains of major river systems.

Recently, I had the good fortune to ride my bike from Harpers Ferry, WV to Pittsburgh, PA, first along the C&O towpath and then the Great Allegheny Passage (GAP) trail. One thing that occupied my brain as I rolled along was why there were so many pawpaws along the way, almost to the exclusion of many other familiar understory species. 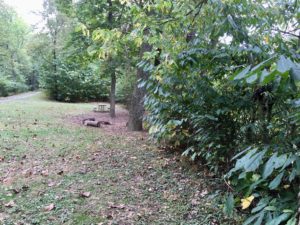 Pawpaws frame one of the many campsites along the C&O towpath.

If you are not familiar with the pawpaw (Asimina triloba) or partaken of it fruit, you should come on a hike with my wife, Garnett, and I sometime in the Fall.  Garnett has the uncanny ability to smell ripe pawpaw fruit that is still on the tree or on the ground.  We will be walking along, and she’ll say, “go give that tree a shake.”  As I do so, ripe pawpaws come raining down.  They are a delicious hiking snack, except that your hands are quite sticky for the rest of the outing.

Recently, we were paddling on the local reservoir, and she smelled the ripe pawpaws from the canoe!  As I gave the waterside tree a shake, she paddled to and fro, trying to maneuver the canoe to capture the falling fruit.  Sadly, they all plopped into the water on all sides of the boat.  No pawpaws that day.

So, pawpaws on not an unfamiliar site, especially along streams, in floodplains, and even on mountain slopes.  However, on the C&O, they seem to have asserted themselves to an unusual degree.

When I arrived home, I did a little investigation and also consulted some native vegetation gurus on the subject.  I was interested to learn that pawpaws are the only local representative from the Annonaceae family, which has largely tropical origins.  It produces the largest native fruit of North America.

The fruit of course can be eaten raw (sticky hands and all) or made into ice cream, pie filling, “Poppaws” (baked mixture of mashed pawpaws, milk, sugar, egg, and allspice), and even a nice dry white wine.  Some research has even indicated that the fruit prevents cancer and can produce a safe natural pesticide (Tabler, 2018; Bilton, 2015).  Regionally, pawpaws are also known as the American Custard Apple or West Virginia Banana.

Elizabeth Matthews, Botanist for the National Capital Region Network, wrote an article on pawpaw dominance in places such as the C&O and other regional parks in the D.C., MD, WV area.  Matthews points out that deer (unlike my wife, who is dear but not deer) do not like pawpaws, and this could be due to the odor of the branches and twigs.  This, alone, gives a pawpaw a huge competitive advantage over species that are preferred by deer, such as Red Maple and Black Gum.  Decades of fire suppression may have also helped select for pawpaws, since the species is not particularly fire-adapted. 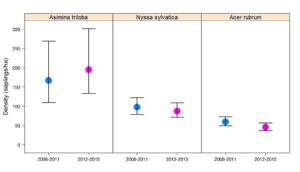 This is one of the graphics from the Elizabeth Matthews article (NPS, 2017).  The chart shows the density over two different time periods of deer resistant Pawpaw (Asimina triloba) versus deer-preferred species, Black Gum (Nyssa sylvatica) and Red Maple (Acer rubrum).  The bottom line: Pawpaws up, others down.  https://www.nps.gov/articles/pawpaw.htm

As for the Appalachian folk song’s reference to the “pawpaw patch,” that is exactly how they grow.  In fact, in biological terms, the “individuals” within a patch can be considered a single plant, since they have an interconnected root system.  In order to produce fruit, pawpaw flowers must be pollinated from flowers in another patch, with flies and beetles being some of the common pollinators (Matthews, 2017).

Is pawpaw dominance a problem for our future forests?  Matthews makes the point that species that do not show up in the sapling layer will likely not make it into the canopy, and the future canopy is most likely to consist of the most dominant saplings.  She makes it clear that notions of future canopy are speculative at this point, but low-growing pawpaw forests could be part of the mix, provided deer browsing continues to exert its influence on species composition.

Other vegetation gurus I consulted expressed some concern for pawpaws being dominant in floodplains.  Pawpaw patches produce deep shade with a sparse ground cover layer, so soil erosion may be an issue.  However, others sang the pawpaw’s praises, expressing that pawpaw dominance can be expected in areas underlain by calcareous rocks, such as the Catoctins.  Pawpaws certainly fill an important niche in that they reliably thrive in the shrub layer, and their natural range is actually dwindling despite their regional abundance.

Whether pawpaw dominance bodes fair or ill for the future, the trees are a pleasant companion when cycling the C&O towpath.  I should also mention that Spicebush (Lindera benzoin) appeared to be almost as dominant in the shrub layer, and both species offered a range of Fall coloration as I traversed southeast to northwest.

Finally, pawpaws were not the only vegetative companion on the long trek to Pittsburgh.  Below, I have composed one-liner tributes to some of the Phyto friends who kept me company along the journey:

Boxelder (Acer negundo) – like a gangly, awkward teenager with sprouts and shoots coming out every which-way. . .you picked tough over pretty, and I honor you.

Sycamore (Platanus occidentalis) – seeing your creamy crown glow on a sunny autumn afternoon renews my belief in the Almighty.

Black Walnut (Juglans nigra) – as for your prolific production of round yellow-green husks, I have turned my ankle more than once on those, but glad the contact was with foot rather than head.

Spicebush (Lindera benzoin) – in the understory, but not under-stated. . .I would miss your essence if I went one step without you.

Red Maple (Acer rubrum) – floodplain’s friend, and to the one on the south side of my house, a summer savior and in the Fall, my rake’s raison d’etre.

Let me know about your own Phyto friends and floodplain explorations.: dave@hirschmanwater.com.  Also, enjoy a couple more photos from the C&O and GAP trails.

The C&O Towpath through the Potomac River forestlands.

A Potomac sunset along the C&O Towpath. 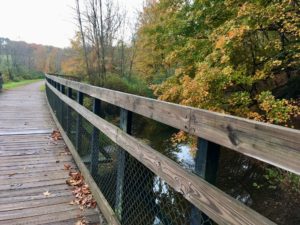 One of many bridges along the Great Allegheny Passage.

If you are interested in a C&O and/or GAP expedition, here is one of several very good web resources (I recommend obtaining the Trail Guide): https://gaptrail.org/.