This is a story that includes several threads.  One, appropriately, is a fabric known as Rayon.  That thread is interwoven with two others: the chemical mercury and the South River Watershed in Virginia’s Shenandoah Valley.  It is indeed a complex weave of science, history, changing economic forces, and an exceptional river.

Rayon was produced at the DuPont plant in Waynesboro from 1929 into the 1960s, and was one of the world’s first human-made fabrics.  The fabric was invented in France in the 1880s in response to the disease that was afflicting the silkworm, and thus creating a silk shortage.  For this reason, Rayon was originally known as “artificial silk.”  Rayon is made from wood fibers, so is part natural and part synthetic.  It quickly became an alternative to wool and silk, and surpassed those fibers in U.S. consumption in the 1940s.  Rayon is used to make a wide range of products, and you likely have some of these in your closet or elsewhere in your home.

I know some shun synthetic fabrics, but whenever I am at the gym, I see the “offspring of Rayon” everywhere (e.g., Lycra, Spandex).  And on chilly days, I’m the first to reach for my fleece.

In ancient times, a form of mercury was used to make cave art in Spain and France.  It was used by the Romans to make cosmetics due to it lustrous, silver qualities, and in the 18th Century, its use extended to the process of making fancy hats for the well-to-do.  This latter application led to the Alice in Wonderland character, the Mad Hatter, as many of these hat-makers exhibited signs of madness due to mercury exposure.  During the California Gold Rush, miners used a mercury compound to extract gold from river sediments.  And it was used as a catalyst in the manufacturing process for products like Rayon.  DuPont used mercury for just that purpose up until 1950. 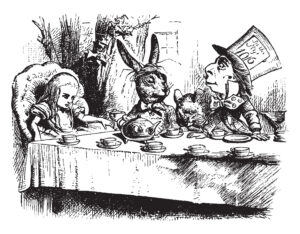 There may have been traces of mercury in the tea at this tea party with the Mad Hatter in attendance. Source: Stockphoto.com.

As any mad hatter knows, mercury is also a neurotoxin.  In the environment, mercury can accumulate in soil and wildlife.  Eating fish with high mercury levels is one of the more common ways that people can be exposed to the chemical.  Mercury’s use in many (but not all) consumer products has been phased out.  However, like an awkward uncle, it just seems to hang around.

In Waynesboro, mercury was discovered in soil around the DuPont plant during a construction operation in the 1970s.  This led to many years of research and investigation, much of it in more recent times conducted through the South River Science Team (SRST) and its research partners.  Each study built upon its predecessors, and, over time, the full extent of mercury contamination in the ecosystem of the South River became apparent. 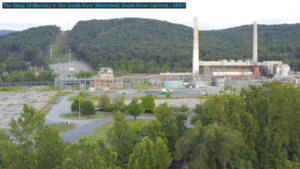 In the 1970s, mercury was discovered in soil during a construction project at the DuPont plant (now the Lycra Company). Source: DV Entertainment.

As elemental mercury goes through a transformation process called methylation, it becomes more bioavailable, and thus can accumulate up through the food chain.  In the South River, that has included not only fish, but, to greater or lesser degrees, mayflies, worms, mallard ducks, birds (those with fish or aquatic insect diets), and snapping turtles.

The SRST research resulted in more than 75 masters theses and dissertations at institutions across the continent.  In fact, the South River is now one of the most-studied rivers in the world.  However, the question remained: how can you clean up a contaminant once it has spread into the riverside soils, streambanks, and parts of the food chain that intersect with contaminated sections of the river?

If you are not familiar with the South River that runs through Waynesboro and north through parts of Augusta and Rockingham counties, you should check it out!  At Port Republic, the South River joins the Middle and North rivers to become the South Fork Shenandoah.  In its headwaters and through Waynesboro, the South River is the most unique cold-water fishery in the State of Virginia.  Where else can you catch trout right near a downtown bridge?  For canoeists and kayakers, the City has created a four-mile water trail with easy access points in City parks, and there are other river access points downstream in Augusta County.  You may have enjoyed swimming, camping, or mountain biking at Lake Sherando in George Washington National Forest or explored the Grand Caverns in Grottoes – those are in the South River Watershed.  In short, it’s a recreational mecca, and those activities are all safe and accessible.  With regard to mercury, the primary caution is the fish consumption advisory posted by the Virginia Department of Health.

Circling back to the mercury clean-up dilemma and all those studies conducted by SRST partners — the research resulted in an ecosystem model that analyzed the movement and storage of mercury in water, soil, the streambed, stream biota, and wildlife.  The model pointed to eroding riverbanks as the primary means for the mobilization of mercury.  This resulted in a remediation design that removed soil from the most contaminated banks, capped it in others, and revegetated the banks.  Based on other scientific findings, the design also incorporated biochar, a charcoal-like material with a high capacity for binding up chemicals.  Incorporating biochar in the design added a degree of innovation to the remediation process.

To date, six of the riverbanks with the highest contamination levels have been remediated, encompassing over a mile of riverbank.  As an added benefit, DuPont (now Corteva) also worked with the City to coordinate the grading of access and haul roads during the remediation process with planned routes for the City’s Greenway trail.

The Story Weaves Together

The South River is not the only place where a manufacturing process, a chemical, and a watershed are interwoven in complex ways.  As a legacy, it is really to story of the development of our country, our economy, and our cities and towns.  The fascinating thing about the South River version of this story is that it is also a tale of transformation.  The South River historically was viewed as a menace that caused catastrophic flooding.  It was a convenient place for industries that lined the river to dump their wastes.  On any given day, the color of the river water was indicative of the color selected to dye corduroy in one of the factories.  In short, it was not a place for people. . .or fish or wildlife.

And now it is, and, importantly, aims to be even more so. That has happened with a lot of small and large steps taken every year to reinforce that emerging relationship and Waynesboro’s identity as a “river city.” Those actions include not just remediating mercury, but building greenways and river trails, creating access points, removing dams, installing habitat structures, and creating an economy that recognizes the value of a healthy river.  These actions have been undertaken by government agencies, groups like the Shenandoah Valley Chapter of Trout Unlimited, farmers, local businesses, and the community at large. 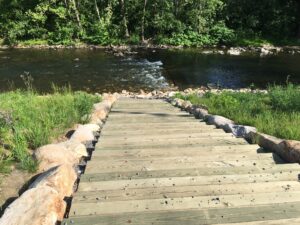 For more information on the threads of this story, watch the short video (linked below) and check out the website for the South River Science Team, soon to become the South River Watershed Coalition to expand its focus from mercury to a more holistic watershed perspective.  The website includes the South River Currents newsletter and related videos. 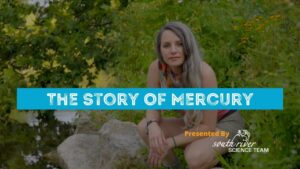 Click on the image to watch this excellent video by DV Entertainment!

NOTE: I have worked with the South River Science Team since 2010, helping to coordinate technical meetings, citizen involvement, and communications. 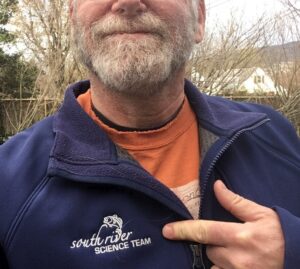