Some coastal communities are grappling with fair weather flooding, when winds, tides, and higher seas conspire to push water overland and up through the storm drain system onto city streets.  I was at a stormwater forum recently where it was discussed whether streets could actually be designed to store water (e.g., have one lane flooded temporarily) as a sea level rise (SLR) adaptation strategy.

This discussion made me reflect on the complex topic of risk: how it is assessed, measured, communicated to the public, and, in many instances, normalized in the culture.

There are many factors influencing how we perceive different risks.  There are risks that we choose to take on, such as driving our cars into town or eating a PB&J sandwich.  Barring some unforeseen incident, these are the normalized risks that are seemingly benign on a day-to-day basis.  The more ominous risks involve things that we do not choose and that are associated with outside or even ominous forces.  With these risks, the hazards are random and capricious.  Think of a hurricane or tornado that veers off-course, striking the heart of a city or town with devastating force.  In these cases, the mysterious forces of nature take on a malicious quality, because the risk is beyond our control or choice.

When I was a kid in the 1960s, one of those ominous risks was the threat of air raids carried out by our nuclear rivals.  We had drills in school, called “duck and cover,” where we moved away from the windows, crouched under our desks, and covered our heads with our hands.  This, under the theory that our desks would somehow protect us from the shrapnel.  There were videos that showed us how to properly duck and cover, and the precision with which we executed the drill was observed by our teachers and school administrators.  This became so normalized that I don’t recall the drills having much of an emotional impact on me, except for some heightened appreciation of my desk!

In that time period, the landscape was also dotted with fallout shelters where, presumably, the populace could hole up for an undisclosed period of time subsisting on Wonder Bread Ò, canned beans, and water.  If the worst happened, air raid wardens in silver helmets and jumpsuits would be there to usher us (or some of us) into these shelters, or we might have one nearby in someone’s backyard.

A few years ago, my family visited the underground Congress below the Greenbrier Hotel in West Virginia.  This clandestine and massive construction project, built between 1958 and 1961, includes House and Senate chambers, dormitories, dining hall, infirmary, power plant, and other facilities built 720 feet into a hillside behind the protection of massive blast doors.  You can visit that facility now as a tourist, but back in the day it seemed important that Congress should stay in session during the nuclear winter (http://www.greenbrier.com/Activities/The-Bunker/Bunker-History).  One could speculate about whether today’s two houses of Congress could even survive the experience of being holed up together in an underground bunker. 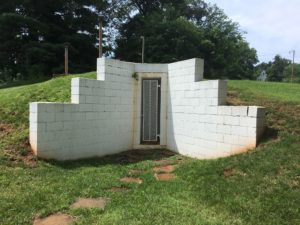 This fallout shelter, a vestige from the 1950s, is tucked into a corner along a commercial corridor in my neighborhood.  Nobody seems to remember who built it, and perhaps importantly, who has the key to the padlock.  I suspect the Wonder Bread and canned beans gave gone bad by now.

The point of all this talk about fallout shelters is that the population was, seemingly, willing to take on the risk of living in a hole in the ground surviving on Wonder Bread, perhaps for months, because this was communicated as a national imperative from all levels of government as well as business and civic organizations.  Climate change and sea level rise have not yet risen to that level of imperative, so the attendant risks appear to be unacceptable.  Not being able to drive our cars if the road is flooded, even for a couple of hours, is an unacceptable risk, or at least an intolerable nuisance.  Some government agency must be at fault, and we want it fixed.

In public works terms, we can look at this as a level-of-service issue, but it is also a challenge of risk assessment and communication.  The sea level rise panel I attended presented the intriguing notion that infrastructure can be designed deliberately to flood for short periods of time, but in a way, again by design, that lessens the risk to the public.

If one lane or the road edges flood for two days, people can still pass in their cars, albeit at a slower pace.  If the more remote edges of a parking lot have standing water for a brief period of time, parking may be inconvenienced, but commerce would continue.  There are design competitions and actual examples of buildings being able to float when the water rises.  Some communities have explored these strategies by hosting delegations from Holland, Denmark, and other places that have a richer tradition of “living with water” (see, for instance, the Dutch Dialogues: http://wetlandswatch.org/dutch-dialogues).

On cost-benefit terms, these types of strategies must be compared to the massive investments and uncertain benefits of projects like sea walls, levees, and upsizing many miles of storm sewer.  Some type of blend of strategies could be conceived if the attendant risks and trade-offs are communicated effectively to the public.  What type of blend would be best for public safety, commerce, and preservation of property and its value?

Obviously, major hurricanes still present a huge challenge that would surpass the capacity of all of these solutions.  Risk management must include other types of mobilizations for these events.

But here’s the strange thing about risk, how we perceive it, and our collective willingness to accept it in some measure.  In my childhood years of the 1960s, we accepted the theoretical risk of living in fallout shelters because it was a national imperative.  Most thankfully, we never had to do it.  Sea level rise and climate change risks are already happening in city streets, backyards, and neighborhoods, but the imperative part is just catching up with reality.  Climate change wardens in silver helmets and jumpsuits, anybody?