1990 was the 20th anniversary of Earth Day.  I was a graduate student at Virginia Tech.  I don’t recall how it happened, but I became the campus Earth Day coordinator.  I received so many calls (remember land lines) from people wanting to speak to Dave about Earth Day, that my roommate Alison, who answered many of those calls, starting referring to me as Earth Dave.  “Another call for you, Earth Dave,” she would exclaim, almost cheerfully.

Our committee had planned a whole week of Earth Day activities.  One of the main events was an alternative transportation parade through Blacksburg and Virginia Tech.  Most of us planned to ride our bicycles, led by Blacksburg Transit buses.  We had arranged for a police escort, but on the actual day, it was raining so hard, the police must have imagined that no one in their right mind would ride a bike is such weather.  We showed up, but the police escort failed to materialize.  Undaunted, our soggy parade proceeded, although much diminished in numbers with just a spectator or two along the route.  I found some old photographs of that event, and everyone was smiling and laughing in their blaze orange vests.  I have a feeling that some of you reading this post may have been numbered in that intrepid crew. 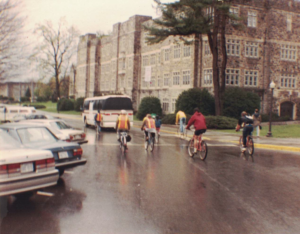 1990 Earth Day VT bicycle and bus parade in the rain

Another initiative was to conduct a campus environmental audit.  I don’t recall how this idea emerged.  It was well before any concept of an institution’s carbon footprint became a norm of sustainability.  We decided we would collect data on the campus’ energy and coal consumption, solid waste, food waste, and anything else we could get our hands on.  As it turns out, it took several months to gather the information.  The facilities staff we reached out to ranged in attitude from suspicious to dumbfounded to simply confused by the question.  There was no baseline, no reduction goal; it was just a set of numbers that was generally unknown and unexplored at the time, at least in the public realm.  That has changed in the intervening 30 years.

Earth Dave is now 30 years younger, and also cognizant of the power of the rising generation of environmentalists that will lead the parades of the future.  We love you.  We need you!  Happy Earth Day 2020.