Up Close in the Distance

Adhering to the social distancing mandate, Garnett and I decided to head up to the Blue Ridge this past weekend.  The weather was cold and foggy.  We headed to a spot called Humpback Rocks, which would normally be crawling with people on a fair weekend day, as its rocky escarpment offers spectacular views of the Piedmont to one side and Great Valley to the other.  But on this cold morning, the top of the ridge was shrouded in fog and mist, and the crowds had stayed away.

Driving up the Blue Ridge Parkway was like travelling inside of a cloud.  You could make out the dark columns of tree trunks a few feet to either side, but beyond, the view was swallowed by thick fog.  It was like flying in an airplane through a cloud, with your nose glued to the airplane window for the novelty of not discerning anything in particular.

We ascended the steep trail through mist and drizzle.  At some point of elevation near the top, the mist clung closely to the ground and trees.  Each fine branch and twig was covered with intricate ice crystals arranged in peculiar linear patterns, as if pointing the way. . .somewhere?  As the temperature warmed slightly, the crystals starting raining down from the trees and coating the forest floor, making clicking sounds as they fell. 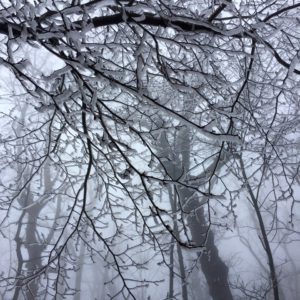 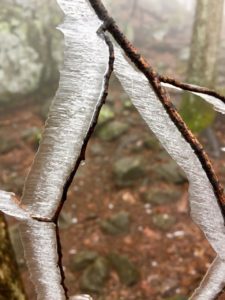 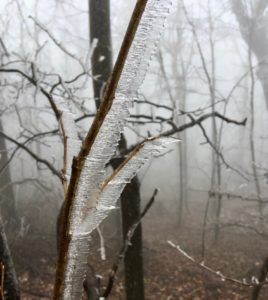 Reaching the ever-popular rock outcrop known for its views, we stepped gingerly around the slick rock surface to get a view. . .of fog and mist.  Having been up to this spot numerous times before, we could try to construct the view in our minds, but even that notion seemed to be swallowed up by the fog.  The foggy mountain top was an experience in its own right — the opportunity to not be able to see what lies out there or ahead because it is a mystery.

The ice crystals continued to click-clack down from the trees onto the forest floor, and we started focusing on the small view instead of the (usually) grand one up on the rocks.  The forest floor was a mosaic of fallen leaves of various rusty hues, rocks, a dark hickory nut or two, and glowing crazy ice crystals.  Each square foot contained its own intricate mountain story. 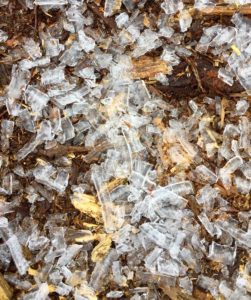 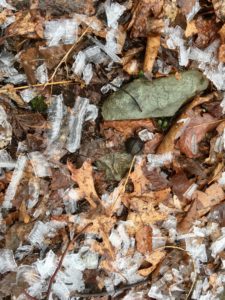 Like the rest of you, I look out into the future and it is shrouded in mist and fog, at least for the time being.  There is fear all around when we can’t summon that view, either from memory or any assumption that it will be anything like the past.  With the grand view swallowed up, we still have the close one always available to us.  Every square foot of it tells its own story.