One of my first jobs out of college in the early 1980s was working as a dishwasher and line cook in a vegetarian restaurant in Durham, NC.  The name of the restaurant was SomeThyme.  The place was quite a fixture within Durham’s cultural vibe at the time.

As a new dishwasher, I had to be trained, and my mentor was the ever laid-back Walt.  Walt had few materials wants in this world, including, as I recall, shoes (which he wore grudgingly at the restaurant due to the health codes).  It wasn’t long before Walt was transmitting all kinds of wisdom about how dishwashing fit into the broader scheme of the cosmos.  Walt compiled this wisdom into the law of concentric circles.  It was this philosophical approach to dishwashing that earned Walt the moniker of Doctor Dish.

Today, after 37 years, I will take the bold step of sharing a morsel of the law of concentric circles with you.  At that time, we washed and sanitized dishes by hand.  The smallest and innermost of the concentric circles was the orbital hand motion of cleaning each dirty dish as it came in.  It didn’t matter if it was the crumbs from a tempeh Rueben or the blobs of some homemade vinaigrette – it was the circular motion that made that plate clean again.

From there, the now-clean plate would go back into circulation, refreshed with a new meal to be carried out by the servers to a different customer in the dining space.  Of course, that plate would once more become dirty and head back into the kitchen, where the minions of Doctor Dish would perpetuate the cycle: clean-dirty-clean-dirty – each dish journeying many time around this next ring of the concentric circles.

The restaurant patrons would come into the restaurant, enjoy their meal, and head back into the wider world of Durham to live their lives in it.  Perhaps in another week, month, or year, that same patron would come back in, defining yet another, broader circle.

At this point, I may have stopped paying attention to Doctor Dish (it must have been the strong detergent odor), but of course there are the ever-distancing circles of the flow or people and materials in and out of Durham, the Earth in orbit around the sun, and the solar system rotating around in the void – but it all originated with the small circular motion of cleaning that one plate.

The main thing Doctor Dish wanted to impart was that washing dishes was not (just) a tedious chore, but an integrated part of being connected. . .well, with everything.  If you didn’t lose sight of that fact, the job was fairly entertaining, and we played with how the concept was manifesting in various ways within each dishwashing shift. 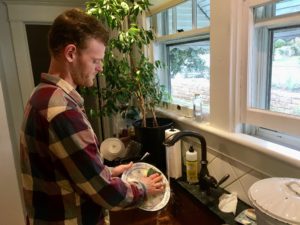 My son, Oren, practicing the teachings of Doctor Dish

We all have many small circles to attend to in our work and in our lives.  Pulling the same weed from the rain garden year after year, adding a data point to a GIS layer, sending endless emails to schedule just one Zoom meeting, proof-reading the proposal yet another time. . .perhaps even washing dishes.

Doctor Dish would instruct us to not let our world become a composite of just those small circles; to not lose awareness of the broader circles to which they are connected.  To put it another way, each small act reverberates out to broader and important things, even those we feel powerless to influence.

Dang, I hope that is true Doctor Dish!  I’m walking around barefoot today in your honor.

P.S. I have been working as an election official in Charlottesville for several years.  On Tuesday, I will be assisting people to cast their votes.  I know Doctor Dish would view the act of voting as fitting right into the law of concentric circles.  I hope you do as well.