Big infrastructure projects tend to be contentious. Over the course of my career, the hottest potatoes have been the expansion of a drinking water reservoir, building a new highway near a drinking water source, a 765kv powerline through the mountains, and the current issue of a proposed natural gas pipeline.

I must admit that I am grateful for the forefathers and foremothers in our communities who envisioned, planned, and executed all the infrastructure we rely on today. I think of these planners and engineers only rarely when I turn on the tap or turn up the thermostat. However, their efforts 50 or 100 years ago laid the foundation for our modern communities, conveniences, and economies. They were in a position to look into the future and discern the need for infrastructure to keep pace with an expanding population and development of the community. In some cases, these past projects also offered recreational opportunities that we still take advantage of today. Undoubtedly, much of this planning took place in a day with fewer regulatory hurdles and less concern about impacts to sensitive ecosystems.
Big infrastructure is sure to raise controversies today. Battle lines are quickly drawn about the need for the project, the actual or perceived winners and losers, and, importantly, a myriad of environmental impacts. A cadre of experts is needed to navigate the permitting environment, and procedures provide opportunities for stakeholders to engage through administrative and legal avenues. In short, planning for future infrastructure needs as our communities continue to change is a high stakes and challenging task.

One component of today’s infrastructure project review is the National Environmental Policy Act (NEPA), adopted in 1970 as part of a wave of environmental legislation. Many are familiar with NEPA’s requirement for an Environmental Impact Statement, including a statement of need for the project, environmental impacts, and accounting for costs and benefits. These reviews apply to projects that have some component of federal funding, and similar procedures apply at the state-level in many places.
As NEPA approaches its 50th year, there seems to be a lot of cynicism (especially among project foes) about the veracity to the NEPA process. Some believe the process leads to project approval as a foregone conclusion, as long as the administrative i’s and t’s are dotted and crossed.

It could be that part of this cynicism is due to the fact that NEPA and NEPA-type reviews by federal and state regulators have not been updated to account for our modern concerns. Here are two examples of such concerns:

EPA’s somewhat bureaucratic definition of environmental justice goes as follows:
Environmental justice is the fair treatment and meaningful involvement of all people regardless of race, color, national origin, or income, with respect to the development, implementation, and enforcement of environmental laws, regulations, and policies. https://www.epa.gov/environmentaljustice
The real issue is that poor and minority communities have been and continue to be disproportionately subject to the negative consequences of our society’s development and use of resources. Many point to a 1982 protest in Warren County, NC as the launch of the environmental justice movement. There, the state had to clean up many miles of PCB-contaminated soil dumped along roadsides. State authorities decided to deposit the soil in a landfill located in one the poorest communities in the state, and one with a majority black population. This led to months of organized protests. Many were arrested, lying in the road to block the line of dump trucks laden with contaminated soil. Those arrested included local community members, a U.S. Congressman, and an idealistic young college student who shall remain unnamed. 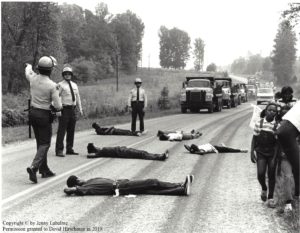 The movement gained steam through the 1980s and 1990s, as health and mortality statistics confirmed the trend that dirty landfills, dirty industries, and dirty air and water were correlated with poor and minority communities. More recently, a proposed natural gas pipeline in Virginia has come under fire for the proposed location of a large compressor station in a poor and minority community along the pipeline’s route.

Perhaps the typical NEPA-type review is not paying full heed to environmental justice concerns. Many people benefit from the services provided by big infrastructure (e.g., affordable water, fuel, and consumer products), but who is paying the price? These days, big infrastructure planners are much more sensitive to such community concerns, but much of the activity centers around mitigating or compensating for the impact rather than the initial siting of facilities considered to have risks to the surrounding community.

Of all the environmental concerns that led to NEPA’s adoption in 1970, climate did not make the A-list. Nearly 50 years hence, it is now at the top of that list. The tricky thing about big infrastructure is that it commits today’s and tomorrow’s resources to the continuation of certain patterns of consumption. For instance, a natural gas pipeline constructed in 2019 or 2020 ensures reliance on natural gas as a primary fuel source for another 50 or 100 years. Once billions are spent on the infrastructure, the infrastructure must be fed in order to maintain its viability. Even if we can surmise that the energy is needed now or in 10 years, that long-range commitment to a certain energy path is troublesome.

Similar arguments can be made for big infrastructure projects for transportation or water supply, as patterns of consumption related to the automobile and abundant, cheap drinking water are reinforced. By going big, are we committing to a future of resource consumption rather than alternatives that perhaps we cannot even envision at this point in time? Do climate concerns demand a higher level of risk analysis? Can we count on a collective trust that future technologies will deliver our services with much more efficiency, along with higher tolerances for real conservation among us consumers?

Is There A Case for an Incremental Approach?