Aliyah had driven through North Dakota once on a cross-country trip with some college friends.  They were headed to Olympic National Park in Washington State and were zipping through the Great Plains to get to their destination.  It was nighttime during most of the traverse of North Dakota. Aliyah recalled waking up at dawn in the backseat to a view of wheat and alfalfa fields stretching to the horizon, which was a distance in this landscape that Aliyah could not begin to approximate.  The fields were dissected by long lines of sprinkler irrigation systems mounted on evenly spaced triangular wheeled towers.  They looked like giant prehistoric insects in the dim light of morning.

Aliyah wondered what kind of natural ecosystem Professor Weed would go after in that landscape to complete here giant continental “W.”

She started by calling an FBI colleague in the Fargo office, Sam Smithii.  Sam was an avid outdoorsman and hunter.  Sam indicated that by far the most important natural habitat of North Dakota was the prairie pothole region, an area of the Northern Plains that was once part of the largest expanse of grasslands on Earth.  Sam went on to describe how the region covers parts of five Plains states, including North Dakota, and three Canadian provinces, but natural habitats have long been shrinking due expanding agriculture and drainage of the wetlands.  The area has also been the focus of intense conservation efforts to preserve remaining wetlands that are critical nesting and forage sites for migratory waterfowl.

Sam glanced at the stacks of paperwork on his desk, hesitated for a moment, and responded, “Sure thing, I’d love to!”

Sam greeted Aliyah at the Fargo airport in his Ford F-150 pickup truck.  “Gave her a wash in anticipation of your arrival,” Sam said, glancing at his sparkly maroon truck with evident pride.

Aliyah and Sam had been on several conference calls together but had never met in person.  Aliyah looked at Sam in his blue jeans, black cowboy boots, light blue western-style shirt with a beaded bolo tie synched at neck, navy blue sport coat, and tan cowboy hat.  She admired his large silver belt buckle picturing a bucking horse, with Sam’s belly hanging just a bit over the top of the belt.  She glanced down at her skinny jeans, sandals, white blouse, and short, black tailored blazer.  She thought about the cargo pants, polo shirts, work boots, and a black ballcap with “FBI” emblazoned on the front in large gold letters that she had packed for her “field” clothes.  “This is going to be fun,” Aliyah thought to herself.

As it turned out, the trip started out as more fun than business.  Sam took the job of showing Aliyah around his home state as an opportunity for a mid-week holiday.  They took in the Native American art at the Plains Art Museum in Fargo.  Spurred on by questions that Aliyah had about certain of the art pieces, Sam took her to visit some of his aunts, uncles, and cousins from the Spirit Lake Nation at Fort Totten.  From there, they sampled the local brewpubs, and attended a fundraiser for Ducks Unlimited in Bismarck.

Aliyah knew Ducks Unlimited as the leading non-profit working to protect waterfowl habitat, with state chapters across the country.  She also surmised that it’s membership consisted primarily of hunters.  She felt a bit of trepidation about attending the fundraiser, keenly aware of her outsider status, not the mention the fact that she was a Federal agent.

Prior to the event, she had her dreadlocks tucked neatly into a bun at the back of her neck, as was her custom when on professional duty, but, at the last minute, untied the knot and let them fall down her back and shoulders.  “Why hide the obvious,” Aliyah thought to herself.

The crowd consisted of ranchers, government extension agents and soil scientists, the owner of a hunting and fishing guide business, several university professors, local business owners, young professionals, and a smattering of high school and college students.  Aliyah surveyed the group, noticing that many had grey or salt-and-pepper hair, while the younger ones had brown or blonde hair, some with full beards, and several with jet black hair buzzed short and flat on top.  The crowd greeted Aliyah as a visiting dignitary, and as one of Sam’s respected law enforcement colleagues.

She even put in a bid at the silent auction on a fine, large print of a pair of Mallards, female and male, taking off in flight from a wetland, beads of water streaming from their tail feathers.  In the background,  a “V” of ducks on the wing danced across the prairie horizon.  Having actually won that painting in the auction, she wondered how it would fit in with the urban decor in her apartment back in D.C.  The event was also quite useful for intelligence gathering about likely places among the many square miles of grasslands to begin her search of the prairie pothole region.

After the Ducks Unlimited event, Aliyah considered the cultural divide between that crowd and her environmentalist friends back home, whose proclivities leaned more towards pollinator gardens and nature hikes versus duck blinds and shotguns.  Her grandmother and great-grandmother nurtured intimate relationships with plants based on foraging for food and medicine.  These intersections were interesting and warranted more attention.  But only after the completion of her more immediate purpose for being in North Dakota — stopping Professor Wander Weed, or whomever the tan gardening glove culprit was, from inflicting any more harm.

In that regard, she was becoming impatient with Sam’s rambling sight-seeing tour, so was a bit relieved when he informed her, while sitting at the bar at the Busted Knuckle Brewery in Williston, that he better get back to that stack of paperwork in Fargo.  The next day, Aliyah got a rental car, and thanked Sam for his hospitality as he drove away in his now very dusty Ford pickup truck.

The U.S Fish & Wildlife Service operates a string of wildlife refuges and game preserves, many squarely within the prairie pothole region of North Dakota, which stretches in a band from the northwest corner of the state bordering Montana and Saskatchewan down toward the state’s southeastern corner.  Based on the recommendations of those she met at the Ducks Unlimited fundraiser, Aliyah started in the northwest corner, and worked her way eastward, parallel to the Canadian border.

Professor Weed could complete her giant “W” anywhere in this vast region spanning over 400 miles. Thinking about this fact while glancing out at the agricultural fields through the windshield of the rented Chevy Equinox, Aliyah thought of an apt cliché apropos to the farmland she was passing through – a needle in a haystack. 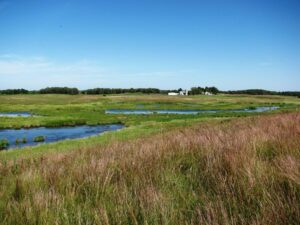 On day three of her expedition, she stopped for breakfast as Gramma Galax’s Family Restaurant.  She ate her eggs, sausage, and biscuits at a booth with a window facing the parking lot.  She scanned the vehicles in the lot, which included an array of pickup trucks and large SUVs with North Dakota and Montana license plates and a handful of late model sedans from Minnesota, South Dakota, and Iowa.  Halfway through the bite of a biscuit, she caught the blur of a white Toyota Corolla proceeding to the exit.  The car must have been parked behind the restaurant as Aliyah had not noticed it before.  When the Toyota paused at the restaurant exit to see if the way was clear, Aliyah noted the Connecticut license plate.  The wheels of the Toyota didn’t actually squeal, but the car pulled out onto Route 2 headed north with an apparent degree of haste.

Aliyah threw down the biscuit onto the plate of her half-eaten breakfast, slapped a $20 on the table, and sprinted out of the restaurant, attracting the attention of the other customers.   The Toyota was no longer in sight, but Aliyah knew which way it was headed.  The next wildlife refuge in that direction was the Lostwood National Wildlife Refuge, and Aliyah directed the Equinox towards that destination and hit the gas.

The Toyota was nowhere in sight. She spent half the day at Lostwood searching the trails, prairies, and wetlands for any evidence of the tan gardening glove, but to no avail.  Dispirited, she headed east in the afternoon, travelling on County roads through farm fields and crossing the Upper Des Lacs Lake on Route 52.  Her next logical destination was the Des Lacs Wildlife Refuge on the east side of the lake.

The small gravel Refuge parking lot had four vehicles in it.  Two pickup trucks from North Dakota, a Ford Explorer from Montana, and the white Toyota Corolla from Connecticut.  It was the kind of older Toyota sedan, probably from the 1990s, where the body was rusting away, but the engine just wouldn’t quit.  “Well,” thought Aliyah, this seems to have solved the needle-in-a-haystack problem, but prompted another cliché, this one framed as a question: who was the cat and who was the mouse?

With this question arousing her suspicions, she had a thought to call Benjamin Benzoin from the parking lot.  “How did you know to call my office at the FBI about the incident at Smoky Mountain Park?” she asked.

“Oh gosh, didn’t I tell you?” Benjamin replied, “it was on the back of a Toyota dealership business card from Wilkesboro I found at the scene.  I thought it was just another piece of trash, but lo and behold.  Here it is right here in my desk drawer.”

Look for the FINAL EPISODE on February 3