Links of Past Episodes: EPISODE 1, EPISODE 2

After talking with Benjamin Benzoin about the invasive plant incident at Smoky Mountain National Park, Aliyah promptly sought out the contacts that Benjamin had referred her to, Pamela Pitcheri from Saugatuck Dunes and Pellia Endivy from Buffalo River.  The three cases had obvious similarities, with the most striking evidence being the tan, leather gardening glove with the crimson “W” left as a calling card.  A pattern was no doubt established, but the question was where would this deranged person strike next?

Aliyah’s thoughts were occupied with the case when she ran into Daniel Didyma, a colleague in the Cyber Crime Division, while refilling her coffee mug in the break room.

“Hey Daniel,” Aliyah greeted her colleague.  “Been on any good romps lately?”

Aliyah and Daniel had bonded over their mutual love for outdoor adventures.  He was about ten years younger than Aliyah, in his early 30s.  He was tall, slender, and wore his brown hair pulled back in a short pony tail.

“Well, work’s been hectic,” Daniel replied.  “But I’ve been trying to get out to Wakefield Park for some mountain biking after work.  Let off some steam, you know.”

Continuing on that line of conversation, Aliyah and Daniel shared some of their favorite hiking spots in the D.C. area and up into mountains for Virginia and West Virginia.  As that conversation was winding down, Daniel returned his full attention of his smart phone.

“Daniel,” Aliyah broke in, “how do you guys track down these cyber criminals when you have few leads, no suspects?”

Daniel glanced up from his smart phone and then back at it.  “Well,” said Daniel haltingly, now looking back up at Aliyah, “it’s about networks, codes, knowing your way around big data.  And some luck,” he added, returning his gaze to his phone.

Aliyah was lost in thought for a minute and then asked Daniel, “How would you go about finding people who are experts with plants?  Know how to identify all kinds of plants.  Botanists, landscape architects, people like that, but maybe something strange about them.”

“Plant plants?” inquired Daniel, needing some clarification as he had not really been paying attention to Aliyah’s question.  “Power plants, or, like, plants. . .vegetation?”

“Yeah,” said Aliyah, “vegetation, native plants, invasives plants.  Someone who knows the difference and can identify the species.”

Daniel gave this notion a brief thought, and then added offhandedly, “Well yeah, could also be someone who has the Seek app, like me.”  He paused.  “I use it all the time.  I’m no Latin name geek, like you,” he added.

Aliyah knew about Seek and other similar apps that people could download on their smart phones but had considered it an unnecessary crutch for species identification.  Those who have the app can simply take a photo of a plant, butterfly, bird, or insect, and the app provides a ready list of likely identifications, along with a brief description of the species and its habitat and range. 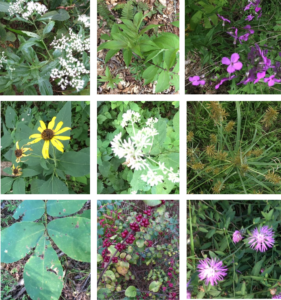 Aliyah looked down into her half-full coffee mug and swirled the coffee around for several seconds, lost in thought.  Looking up, she said, “Daniel, can I tell you about this case I am working on?”

Aliyah shared some more details about the tan gardening glove case, how the glove was found in the three locations, the native and invasive plants, the disturbance to the ecosystems.  Daniel seemed intrigued.

Finally, picking up the previous thread, Aliyah asked, “Do you think you can hack into the Seek database as part of a criminal investigation?”

Daniel tensed and straightened, staring at Aliyah, apparently taken aback by the unexpected request.  However, he soon began to follow the thread that Aliyah was suggesting.  Seek observations and their locations could provide a geographic location and time stamp for app users.  It just might be worth a try.  “Let me see what I can do,” he offered.

Aliyah added, “We don’t want names, just the specific locations of the observations.  Smoky Mountain National Park in North Carolina, Saugatuck Dunes State Park in Michigan, and Buffalo National River in Arkansas, and all since the beginning of July, when the Smoky Mountain incident occurred.”

“Got it,” agreed Daniel, now with a glimmer in his eye.

Later that afternoon and back in her office, Aliyah glanced at her personal cell phone to check the evening’s Taekwondo class schedule.  She looked at the phone and a question rattled around in her thoughts.  Considering what she had just asked Daniel to do with data surveillance, she wondered who was out there snooping in on her own private cell phone usage.

That evening, after Taekwondo, she noticed an unsolicited advertisement pop up on her phone selling martial arts apparel, and she later found the same message in her personal email.  “There’s some justice in that,” she had to acknowledge.

The following Tuesday, Daniel came into Aliyah’s office.  “I just emailed you a file,” he said.  “Take a look.”

Aliyah opened the email and attached spreadsheet.  The list had 323 unique code numbers for Seek observations made since July 1 that matched the locations that Aliyah had prescribed.  Aliyah frowned at her computer screen.  While 323 was not a particularly huge number, it would still not be easy determining whether this line of inquiry was helpful or a useless rabbit hole.

Over the course of several days, Aliyah would glance at the list casually, which she kept as an open tab on her computer.  It probably would not amount to anything.  She had a recurring thought.  “Why would this crazed person who seemed so fixated on and knowledgeable about native and invasive plants need the Seek app anyway?”

That Friday, Aliyah took the afternoon off to take a long walk on the C&O towpath trail to clear her head.  Several miles down the path, she was admiring a lovely wet area filled with Soft Rush, Joe Pye Weed, Milkweed, and Buttonbush, but the tan gardening glove case was occupying her thoughts.  A new thought occurred to her mid-stride.

The 323 data points included everyone who had been in or at least close to those three locations since the beginning of July, but what about the sequence in which the sites were visited?  Aliyah also had a hunch that the culprit, if using Seek at all, would have made observations only in those three locations, and not other sites, as a summer tourist might have.  Maybe the list could be reduced if they eliminated all the codes that included additional sites beyond the three or that were in the wrong sequence?

Immediately, she dialed Daniel’s number.  Daniel was on a mountain bike adventure in West Virginia.  Aliyah could hear the sound of a rushing mountain stream in the background.  Daniel promised to conduct the requested analysis on Sunday when he returned.

On Monday morning at 8:42 AM, Daniel came into Aliyah’s office somewhat breathless and handed her a print-out of a new list.  It had only three entries.  Daniel explained that 277 from the original list could be eliminated because of the wrong sequence of locations, for instance, if they had started in Arkansas and worked their way north or east from there.  Forty-three had included Seek observations at additional locations within the past month, including spots like Big Bend National Park in Texas, Mesa Verde in Colorado, Taos in New Mexico, and cities like Chicago and Indianapolis.  These were all logical places for someone on a more extended U.S. tour.

“OK,” exclaimed Aliyah, “Three is better than 323.  Let’s see what we can find out about those phones.”

The cell phone companies had channels to work with the FBI on criminal investigations, and could locate where the three phones were registered.  One was from Tokyo, Japan, one from Denver, Colorado, and the third from Bridgeport, Connecticut.

The phone from Tokyo was owned by Riku Tatarica.  He turned out to be a Japanese tourist that had flown home to Japan on August 12, the day after the Buffalo National River incident.  The second phone was tracked to Pablo Patens, a National Park Service archeologist based in the Denver office.  A quick call to Mr. Patens revealed that he had been planning archeological surveys and had been to Great Smoky Mountain Park in North Carolina and Tennessee, Great Sleeping Bear Dunes Park in Michigan, and Buffalo National River in Arkansas, and was planning additional stops at parks in Montana, Colorado, and Arizona.  Being a professional archeologist, but amateur botanist, he was a frequent user of the Seek app.

When Aliyah and Daniel saw the name associated with the third phone, the one from Bridgeport, Connecticut, they looked up and made eye contact in unison.  That phone was registered to someone named Wander Weed.